This promotion is open to registered players at Royal Vegas Casino only, so if you’re new to this casino, sign up now via any of our links and take advantage of RVC’s $1,200 welcome package along the way.

The Thunderstruck II tournament is free to enter and is open from the 10th to the 16th of October. You just need to make sure your Royal Vegas account is loaded with some real money to play with, then here’s how to get involved:

The winner of the iPad Pro will be contacted by the 17th of October to confirm details for delivery, so make sure your contact details are up to date within your account. The other 29 winners will have their cash prizes credited directly to their account within 24 hours of the tournament finishing.

If you’re not familiar with Thunderstruck II, it’s an older game that remains hugely popular thanks to its incredible bonus features. The theme is based around Thor, the Norse god of thunder, and features five-reels with 243 ways to win. 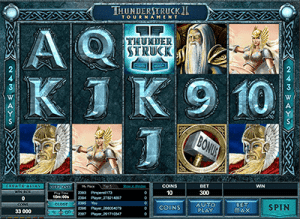 Along with standard wild and scatter symbols, Thunderstruck II features a unique Wildstorm feature which can strike at random to turn up to five reels wild, and the highly lucrative Great Wall of Spins where you can trigger one of four huge free spins bonuses. Valkyrie awards 10 free spins with all wins multiplied by five, Loki awards 15 free spins with the introduction of a Wild Magic symbol, Odin awards 20 free spins with a Wild Raven multiplier feature and Thor awards a whopping 25 free spins with rolling reels offering up to a 5X multiplier.

If you’ve never played Thunderstruck II before, the slots tournament that’s running over the next couple of days at Royal Vegas Casino is the perfect opportunity to win even more while playing this action packed pokies game.

Sign up at Royal Vegas Casino today to claim your $1200 welcome package and join the Thunderstruck II slots tournament for your chance to win an iPad Pro or one of 29 cash prizes.